One of the joys of living in Austin for the past 30 years has been seeing local restaurants develop into the internationally-recognized scene-cuisine it is today. The same can be said for the micro-brew scene where people come from all over to sip our suds. When we first moved to Austin, it was just Bud Light and Shiner Bock. In 1992, Celis appeared and then, suddenly, with a subtle change in statute, brewpubs hopped onto the scene, first with Waterloo Brewing Company (the first post-prohibition brewpub in Texas) followed by Bitter End Bistro and Brewery and Cooper Tank Brewing Company.

These days, there are 31 breweries and brewpubs in Austin with more on the way. Just up the road from Allandale, in the 78758 warehouse district near Burnet and Rutland (known among those in the know as “The Beer District”), are six breweries (with a seventh on the way) and a cidery, all of which are open to the public for flights and pints (and maybe a tour).

If you took the bus (or had a reliable designated driver), you could theoretically visit all of these breweries on foot over the course of a day. In fact, it’s not unusual to see pint zombies wandering Braker, Burnet, Metric, and Rutland groaning “Hops… HOPS…” Because of my selfless personality and willingness to sacrifice for the greater good of you, my dear neighbors, I visited each of these places (thankfully not all on the same day). All of these breweries offer tasting flights of in-the-store wares and creative brewery-only brews. In alphabetical order, my thoughts are below.

When 4th Tap, a worker-owned brewery, first opened, they had three mainstay beers with the 4th tap reserved for rotating seasonals. Today, 4th Tap has 10 taps with three core beers (+2 Vitality [blonde with cardamon], Can You Dig It? [Amber Ale], and Kung Fu Robot [citra and mosaic IPA]) plus an additional seven orbitals (beers that come and go). The Sun Eater (rosemary gruit + strawberries) was so refreshing, we immediately went to the store to buy a few six packs. A few others we tried and enjoyed were Crystal Lake (chamomile ale), Hastur’s Best (saison), and a Zephyr (American Pale Ale). The 4th Tap offers indoor conditioned and outdoor covered seating, although the Western sun can be brutal. The tasting room has a small stage and video games and, in the back of the brewery, a regulation-sized boxing ring for special events (with emphasis on “special”). A food trailer has been out front every time we’ve been there. Ten dollars for a flight of five 5-ounce tasters. 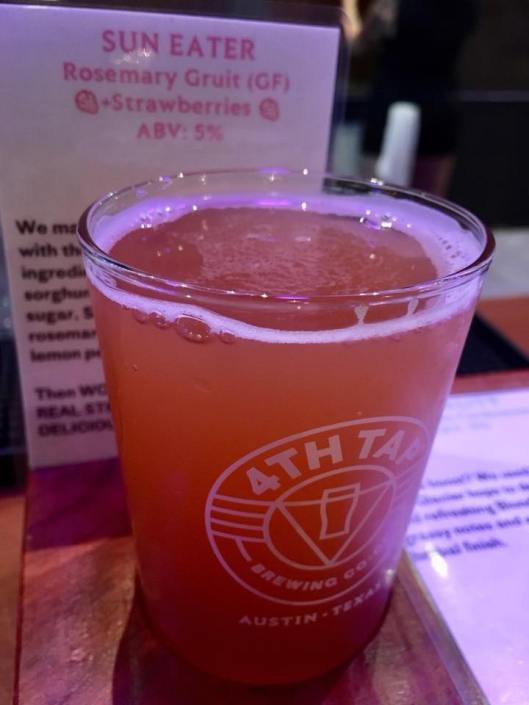 Cringes of cringes (among certain boozy circles), I am not big on hop-forward beers. If I wanted to nuke my tastebuds with puckering bitterness, I’d lick rancid lemon juice off an asphalt parking lot. Here is where Adelberts (uh-dell-berts; named in tribute to the founder’s world-traveling brother) is a godsend since most of their beers are not hopped up. Berts sports a small tasting room among a number of barrel-aged beers (drinkers tip: if you see “barrel-aged” in the description, try it!). There’s also limited outdoor seating and often a food truck. Adelberts serves up large, 8-ounce pours in their flights at $14.09 for six samples and a keepsake glass (and tour if you’re there at the right time). We enjoyed a Hibiscus Saison, a Barrel of Love (whiskey-barrel aged quad), and seasonal Cherry Chocolate Sour.

These folks are funky and fun, and that vibe delightfully carries over to their brewery and brews. It may have been the buzz I was riding from the previous brewery, but I had the most fun in this bright and cheery spot. AB has 11 beers on tap that include their four cores, a couple seasonals, and five creative-as-hell exclusives. We focused our flight mostly on the exclusives, which were mostly sours: Watermelon and Mint Finkle, Pomegranate Blood Orange Finkle, Cherry Finkle, and, for grins, a Spud Light (a premium potato lager). What is a finkle, you ask? Let’s ask Ace Ventura: “Einhorn is Finkle… Finkle is Einhorn!” Austin Beerworks has a large AC’d interior as well as a large shaded outdoor space. Four 5-ounce tasters will set you back $10.

Pierre Celis started brewing beers in the 1960s in his hometown in Belgium where he is credited for single-handedly bringing back witbier. Wanting to expand his brewing empire to the United States, he packed his yeast strain in his sock and flew to Austin in 1992. Later that year he opened Austin’s first craft brewery, a brewery that quickly garnered national attention. Sadly, the brewery struggled and closed at the end of 2000 after Miller Brewing Company bought it. Michigan Brewing Company subsequently bought the Celis name and recipes and brewed Celis beers until its own closing in 2012. Pierre died in 2011, but his daughter Christine, who stayed in Austin, re-acquired the name and restarted the brewery in 2017, exactly 25 years after the Austin brewery first opened. Even better, the brewer, Daytona Camps, is Christine’s daughter and Pierre’s granddaughter. The centerpiece of the tasting room is an enormous copper kettle where the Celis wares are served. I went with the flight of four 5-ounce samples for $10 of Raspberry on Nitro, (the classic) White, Citris Grandis, and Lime Berliner Weiss. Tours are available as are food trucks. 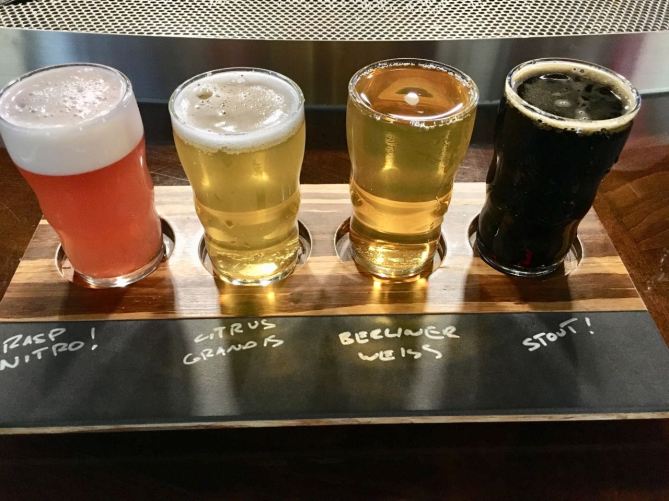 When we pulled up at 4:30 pm to an empty parking lot, we yelped: “Where is everyone?” We soon found out: here is a taproom with no AC! The bar is strung with oscillating fans, but they felt like solar flares and hair dryers. Nonetheless, we sat out at a picnic table where at least the natural breezes felt like they were under 100 degrees. Circle offers five 5-ounce samples for $10. We tried the Alibi (blonde), the Blur (Texas hefe and a fave of ours), Falkor (wit), Doppel Blur (imperial hefe; always try stuff named doppel!), and Party Pig (imperial porter). These dudes, who share aerospace, financing, and MBA degrees between the two of ‘em, won a world beer cup award for their Archetype (historical IPA) brewed to taste like an IPA from hundreds of years ago (not on the sampling menu but available). There were no food trucks there during our Sunday visit. The special events calendar had Pints and Poses Beer Yoga (detox and retox) which might also qualify as hotbox yoga. Not sure what fans of this brewery are called (Circle Jerks? Radii? Arc Angels), but we’ll be circling back for more (one the temps go down). 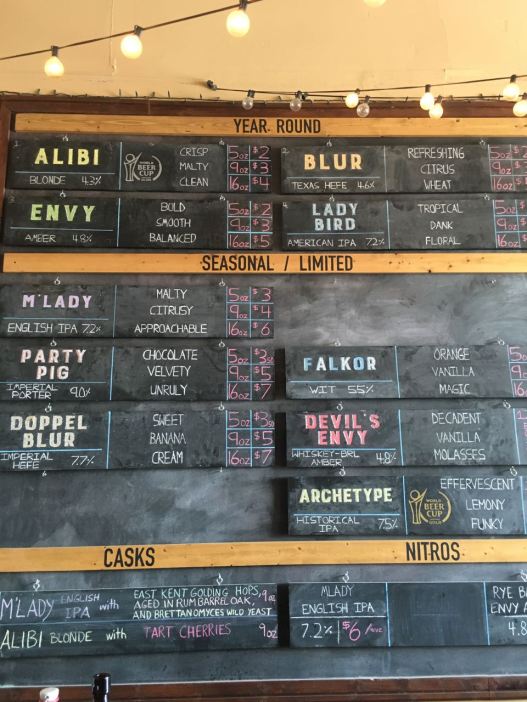 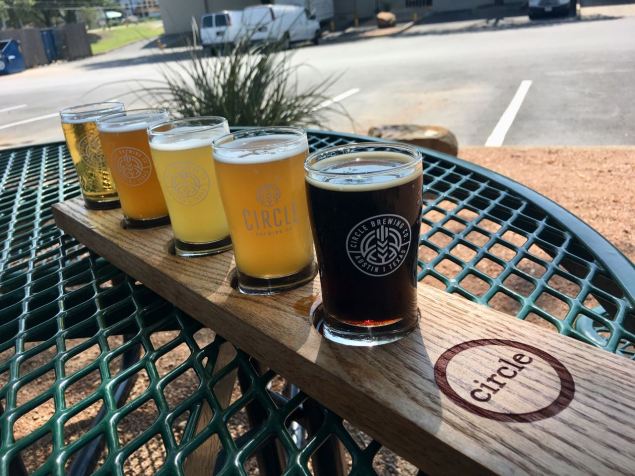 This brewery is almost a speakeasy since you practically have to know where it is and the tricks-of-the-trade to get there. Have a friend take you for your first time if you can. Speaking of cans, Oskar Blues, originally from Colorado with outposts here and in North Carolina, claims to have started the craft-beer-in-a-can craze. Many of their beers are IPA, which is what made their name, but they also showcase beers for non-hoppers like me like the Hotbox Coffee Porter, the Beerito, and Death by Coconut. They have inside (AC’d!) and outside spaces to enjoy brews as well as a proper stage. They also, from time to time, have food trucks.

I know, I know: cider, even hard cider, ain’t beer. But it’s got alcohol in it, right? In reality, it’s hard to pass up the hard apple goodness and fun from Fairweather. Offering 12 different dry ciders on tap, there’s plenty to taste. With four 5-ounce samples for $10, we went with Common (dry, tart, fruity); Tejano Dreams (with Anaheim chiles); Smell the Van (with gin botanicals); and The Grape Situation (with skins from seasonal Hill Country grapes). The Grape Solution was by far our fave. The tasting room is small, but cheery.

Coming in September is yet another brewery, Hopsquad. Based on their facebook page, they will roll out a Dutchess of Oltorf Roggenbier, a Professor Pleasant Pale Ale, a Lord Grackle IPA, a Dr. Montopolis Pilsner, and a Countess Duvel Saison (that’s the hopsquad!) with a promise of chile and mezcal barrel-aged beers in the future.