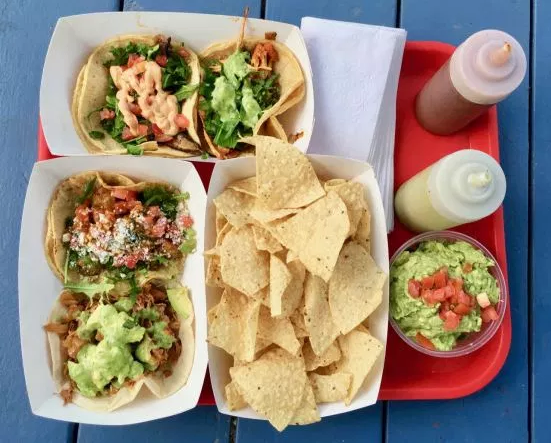 Mellizoz Tacos seemingly follows the footsteps of Torchy’s Tacos, setting up shop where Torchy’s first started on South First after Torchy’s moved a block north, moving a block north to again take Torchy’s spot after Torchy’s closed its trailer, and then opening a brick and mortar, albeit under a different name (Cruzteca Mexican Kitchen). Unlike the Johnny-come-lately gringos of Torchy’s*, Mellizoz’s parents are fourth-generation Austinites with roots in Nuevo Leon. Mellizoz is a play on Mellizo (fraternal twins) of which the family has nine pairs! Mellizoz is also an Austin trailer-food veteran, having started in 2008.

We stopped in on a pleasant Sunday spring evening to enjoy tacos under an oak tree, Mellizoz’s trailer sprawled across the lot (at 41 feet, their converted stock trailer is a doozy or trailer tech). We started with Guacamole & Chips ($6) which also came with squirt bottles of salsa. The Bride tagged the guac as one of the best in town (for me, guac is, for the most part, guac). The salsa is blissfully blisteringly spicy, and the squirter is an efficient way to dress your chow. Intriguingly, Mellizoz also serves up hand-cut garlic fries ($4) and queso bacon fries ($6.75), something for a future visit.

I ordered a fried avocado taco (tempura-battered avocado, arugula, tomato, cotija, and chipotle sherry vinaigrette; $4.25) and a Padre (ancho pulled pork, avocado, sautéd pineapple, and salsa fresca; $3.75). The bride selected the Del Mar (blackened tilapia, slaw, pickled red onion, and chipotle aioli; $4.25) and a Bowman (roasted chicken, sautéd pico de gallo, spinach, and salsa fresca; $3.50). As expected, the tacos were delicious. Mellizoz would probably be a fave spot if we lived south of the river, but, living north of the river, would we drive 20 minutes south for these tacos? Probably not. That’s not damning these dang good tacos; there’s just a whole lot of great tacos all over this town.

Texas Monthly includes Mellizoz’ fried avocado as one of Austin’s best tacos (I’d still place Torchy’s above this one) while Matthew Odam of the Statesman prefers the La Pachuca breakfast taco (egg, braised beef, pico de gallo, and queso [is it OK to write “the La”?]). Mellizoz also slings up tortas but doesn’t sell beer, which the food and shady oak beckon for.

If you’re in the area, the weather’s fine, and you’ve got beer in the cooler, by all means, stop in! Mellizoz won’t disappoint.

This review is part of our sequential tour-through-the-alphabet of Austin’s restaurant scene. Now you know our ABCs!

*I say this in jest, but there’s been something of a Torchy’s backlash. I still consider Torchy’s among the best tacos in town, and they’ve been able to maintain their quality despite their expansions. Unfortunately, because of their expansion, they’re not as uniquely Austin (for cry eye, there’s a Torchy’s in Edmond, Oklahoma!). 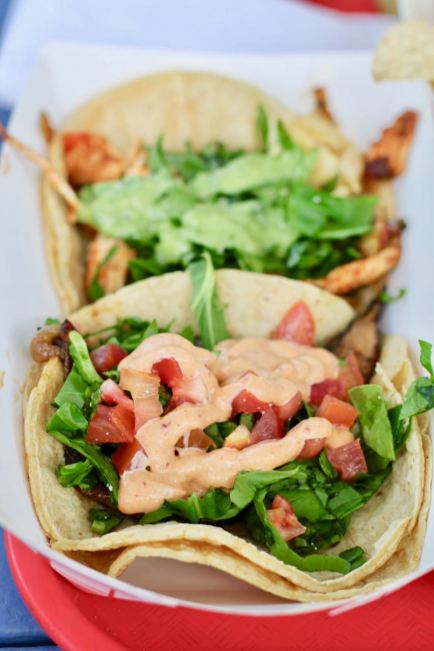 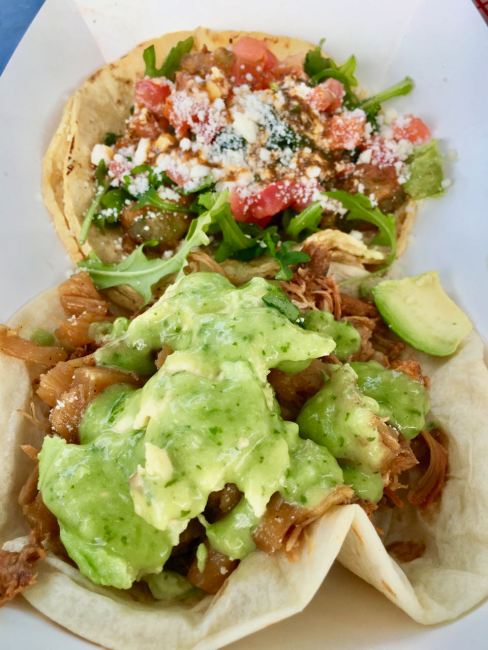 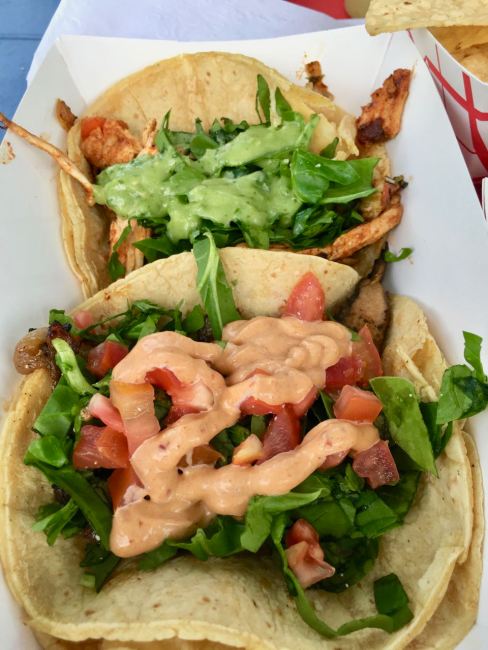 One thought on “m is for mellizoz tacos”