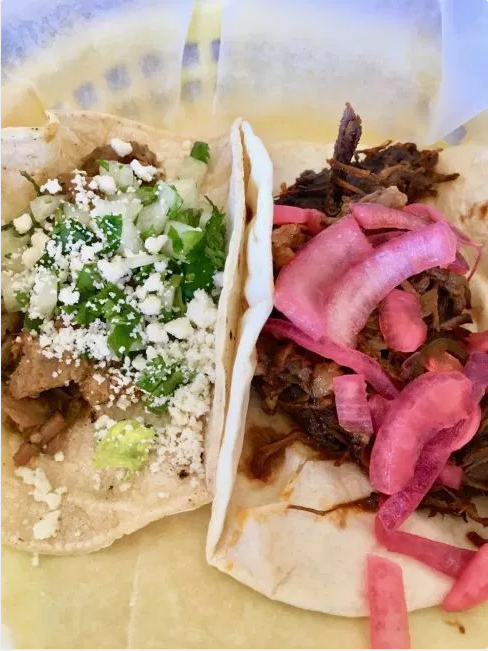 I ate every taco at Tacodeli

Pavement and griddles aren’t the only thing hot around here in August: food news is hot and hopping as well! DipDipDip, the latest from the Tatsu-Ya Twins, finally opened in late June on Burnet and Greenlawn. I had hoped to review it for this issue, but reasonable reservations (earlier than 10 pm for us old folks) are only available a month out, so stay tuned for a review.

A bit down the road (but not too far), Rosedale Kitchen & Bar replaced (the really good but short-lived [but possibly coming back downtown]) Guild at 3800 North Lamar. A neighborhood joint by the good folks at Swift’s Attic, one of our fave non-neighborhood restaurants, the New American cuisine at Rosedale looks promising. The Violet Crown Clubhouse opened in the old pharmacy space at the Crestview Shopping Center offering ice cream, snow cones, games, and a rentable party space. The food trailer court at 5000 Burnet now has Ooga Booga Waffles (review this issue), Bruja’s Brew Kombucha, Taco Sweets, and Dirty South. Hey Cupcake! vacated its flagship Burnet Road brick-n-mortar location, replaced by the newly opened Whoa BBQ.

Filed under “What Do We Need More: A New Mattress Store or New Chicken Joint?”, Happy Chicks (chicken tenders with sides and alcohol) announced that they will move into the space vacated by El Chilito at 6425 Burnet. With Happy Chicks joining Lucy’s Fried Chicken, Tumble 22, Flyrite Chicken, and Top Notch, perhaps we need to name that stretch Burnet Brooders, “Down” Town, Gizzard Grove, or Rooster Row. Moving from happy chicks to chix gone wild, Wild Chix & Waffles at Northcross Mall closed for a menu revamp and reopening in December. A recent stroll around Anderson Mall also revealed that McAllister’s Deli has shuttered. All Schlotzsky’s, including ours on Anderson, are being renamed Schlotzsky’s Austin Eatery. And Matt Odum reported a rumor that La Tazza Fresca, which just closed shop on Guadalupe, would reopen on Burnet. Pho Saigon is opening in the strip mall at 5222 Burnet Road.

A number of neighborhood faves earned kudos over the past couple of months: Austin Chronicle’s Jesse Cape listed Eldorado Cafe as one of the top 10 restaurants in town, a list that included nearby Home Slice North Loop and Easy Tiger at the Linc. Austin Culturemap included Barlett’s and Saffron (review this issue) in its list of “8 Under-the-Radar Restaurants to Visit This Summer.” Eater Austin kudo’d the juice at JuiceLand as one of “Austin’s 16 Most Iconic Drinks” and Tumble 22 in its list of “Spicy Food in Austin: 10 Places to Light Your Mouth on Fire.” Finally, I bequeath kudos upon Dos Batos for switching from styrofoam to compostable take-out boxes (be sure to try their new brisket and fish tacos).

And finally, in what will surely be the highlight of my literary career, I ate every taco at Tacodeli and wrote a haiku about each one: www.austinwanderlist.com/blog.

I wrote this for the Allandale Neighbor