Olamaie is a perfect name. It’s southern (his family is rooted in Kentucky although he’s from Dallas), it represents tradition yet at the same time something new (how many Olamaies do you know?), and it’s truly a beautiful word, dripping with umami and a history hidden behind veils of ball moss. The American-Statesman has had Olamaie as the best restaurant in town (currently #4), and Olamaie has garnered national attention from Bon Appetit, Garden & Gun, and Food & Wine for its locally-sourced ingredients, creative spin on Southern fare, and, yes, its biscuits (“worth the airfare” according to Bon Appetit).

You (or at least, I) have to love a highfalutin’ place that has “Biscuits” on its main web menu, a link that provides instructions on ordering to-go what is purportedly Austin’s best bickies. Although biscuits yelp “Down home!”, Olamaie’s prices are decidedly not hillbilly friendly (unless you’re from Beverley Hills). Some hushpuppies? $16. Chicken and potato salad? $38. A Wagyu Steak? $130. But this is a high-end, high-chef’d, high-service destination; for that, the prices are about right for Austin.

Our visit was rather fantastic. Having worked at Per Se in New York (where a side of risotto can run you more than $300), Fojtasek understands service and atmosphere, which were both elegant and expertly tuned. The restaurant is cozy and has some outdoor seating, so reservations are a must. With steak-searing temps during our visit, we chose to sit inside.

We started the evening with a couple cocktails, she with the Young Americans (cocchi rosa, mate gin, bruto americano, maraschino, grapefruit, and Topo Chico; $14) and me with the Time Out of Mind (rye, sfumato, rhubarb, benedictine, mint, and black lemon bitters; $16). Hers arrived like a colorful parasol while mine evoked leather-soaked war stories–both were tasty and balanced despite the numerous ingredients, dancing on our tongues with tuxedos and evening dresses.

We started dinner with the biscuits, an item only available on request (one of Austin’s worst-kept culinary secrets). The biscuits were glorious, arriving toastily cocooned in a napkin with a sizable ramekin topped with softed and salted honey butter. The biscuits crunched on the outside and fluffed on the inside, just as they should, but (slap us silly) we both agreed that the biscuits at Fixe were a wee bit better.

The small plates we tried were all amazingly rich and flavorful, leaving our tastbuds exhausted by the end of the evening. Our favorite was the Tomato Pie (with cheddar, basil, and hibiscus onion; $16): gorgeous, savory, and full of garden tomato flavor. The tomato pie is also a great example of what Olamaie does: takes a southern staple and carefully carries it up a weather-worn ladder to haute cuisine. This carrying on is also on display with their shrimp and rice (Gulf White Shrimp & Jefferson Red Rice with tabasco, okra, and butter cracker; $19) where the rice was a shockingly delightful combination of texture and flavor. The butter crackers, basically biscuits without the innards, were also memorable.

The Homestead Gristmill Hushpuppies (with Hamery country ham, onion dip, and aigre doux; $16) were decadent flavor bombs that also leveraged biscuit baking know-how. And finally, the Gulf Crab Fritter (with Old Bay, corn remoulade, and succotash; $19) arrived as instagrammable as a gay parade float with a tension of textures between soft crab and crunchy micro-popcorn. The Chocolate Mint Tart (with grape, fig, and crème fraîche chantilly; $14) we somehow devoured for dessert was a great final trumpet squawk to end the meal.

If I had one complaint, it’s that the train of dishes we ordered were too savory: one relentless explosion of lusciousness after another leaving us feeling like Louis the VI after a seven-day caloric bender. However, in all fairness, all we ate were appetizers, which tend toward the savory side. Next time (and there will be a next time) an appetizer and an entree may be in order.

Since the restaurant opened in 2012, Fojtasek and his wife welcomed a daughter to their family. Her name is–you guessed it–Olamaie, adding a generation to the legacy of the restaurant. May that name continue for generations to come.

This review is part of our sequential tour-through-the-alphabet of Austin’s restaurant scene. Now you know our ABCs! 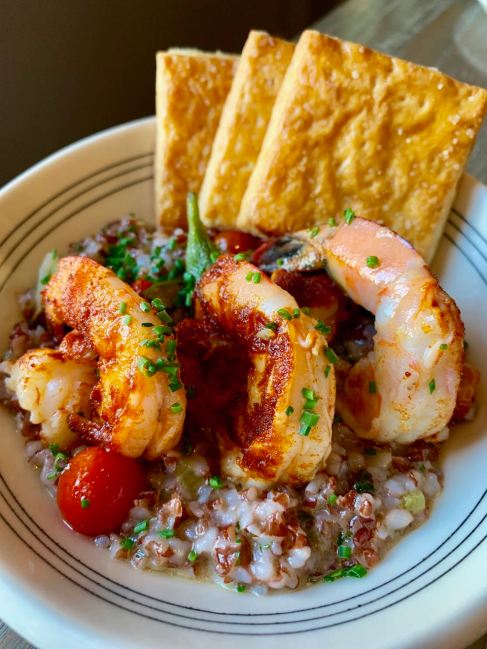 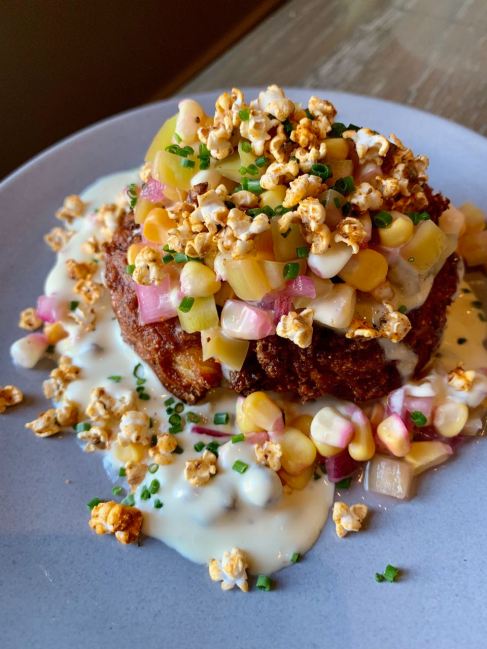 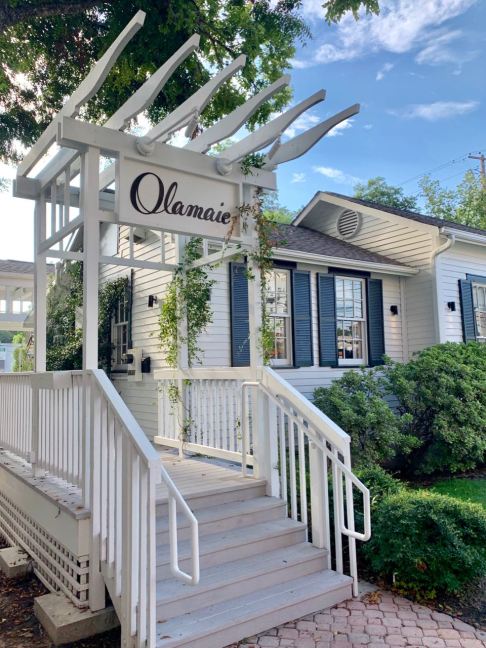 3 thoughts on “o is for olamaie”