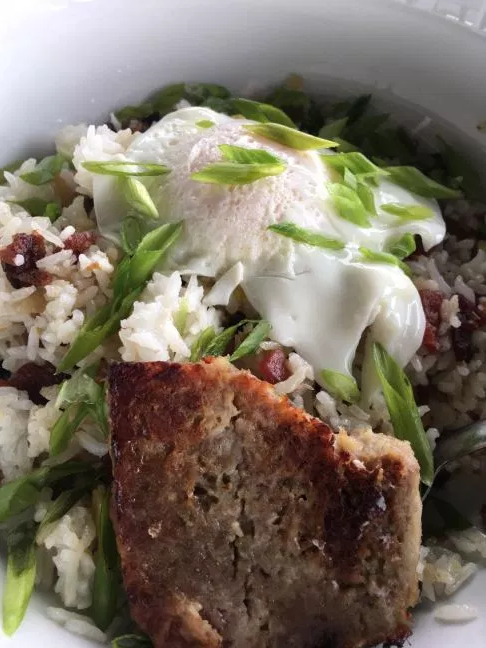 I will dream of you
frolicking in the rice bowl:
hot banana sauce…

The Philippines—in case you didn’t know—is an archipelago in Southeast Asia consisting of 7,641 islands. After being “discovered” by Ferdinand Magellan in 1541, the Philippines—named after King Philip II—became a Spanish colony for the next 333 years. The islands came under US rule in 1898 as a concession after the Spanish-American War (which immediately resulted in the Philippine-American War). The US ruled the Philippines until 1942 when Japan invaded during World War II. Japan held the islands for three years before the US regained control. On July 4, 1946, the US recognized the Philippines as an independent country.

Having been a United States territory, there are almost as many Filipinos in the US as there are Chinese and many more than Indians, Koreans, Japanese, Thais, and Vietnamese. So it’s surprising that there aren’t more Filipino restaurants in the US.

Seeking to address this culinary imbalance is Austin’s Be More Pacific. Starting out as a trailer six years ago, first generation Filipinos Mark Pascual and Giovan Cuchapin have graduated to brick and mortar in Allandale at the previous location of Rebel Pizza above Suzi’s China Grill (not to worry, trailer food fans: the mobiles will remain in operation).

Filipino food is fusion of the country’s diverse past mixed into the broth of its Austronesian roots with a large dollop of Spanish cooking and tea-to-tablespoons of Chinese, Indian, and American cuisine. There’s rice, there’s banana, there’s coconut, and there’s adobo (the unofficial dish of the country). Filipinos tend to pair sweet with salty/savory, so the food is rich and flavorful.

And rich and flavorful is a perfect description of Be More Pacific. Chefs Salvador Melgarejo and Tony Dominguez have assembled a blissfully simple menu (one page!) of culinary adventure that further fuses Filipino and American fares.

For appetizers, we’ve tried the lumpia (spring rolls with the geometry of taquitos stuffed with either veggies and tofu or pork and shrimp) and Longganisa Tots (fried potatoes with white queso, homemade longganisa [Filipino-Spanish sausage], spicy banana sauce, and green onions. Being spring rollish, the lumpia is familiar territory, but the tots (a further fusion) are from another planet where the spicy banana sauce wonderfully counterpoints a zippy spice.

The Tosilog was rich and wonderful, but a little too sweet for my taste (I’m trying to lay off that death powder called “sugar”…). I preferred the sweet garlic fried rice since it leaned far more savory than sweety (although a squirt of that magical spicy banana sauce allows you to sweeten the pot as needed). The bacon fried rice came in solidly on the salty and savory side (where’s that dang banana sauce?).

We haven’t tried dessert yet (see earlier comment on death powder…), but a neighboring table had the Ube Ice Cream (purple yam swirled with specially-made Amy’s) that looked fantastic.

In all cases—appetizer, entree, dessert—the portions are enormous. Dishes are sharable or, in our case, doggie baggable (we’ve scramble the leftovers with eggs for a next-day brunch). Be More Pacific has a bar with beer, wine, and Philippines-inspired beverages of a tropical bent, but oddly does not post their mixology (or prices for anything) on their website. Hopefully this is only an opening oversight and we can expect to see everything soon. I had a spicy drink garnished with a cube of cheese (not sure about that, but enjoyed the intent), and the bride had a sweet. Both were complicated and delicious, just what we look for in mixology.

Missing from the menu are Filipino stalwarts such as camaro (field crickets cooked in soy sauce, salt, and vinegar), papaitan (stew made of goat or beef innards flavored with bile), and Soup No. 5 (made with Rocky Mountain oysters). Perhaps future menu updates with rectify these oversights ;-).

So what’s my overall review? In the immortal words of General MacArthur as he retreated from Japanese forces in the Philippines: “I shall return!” 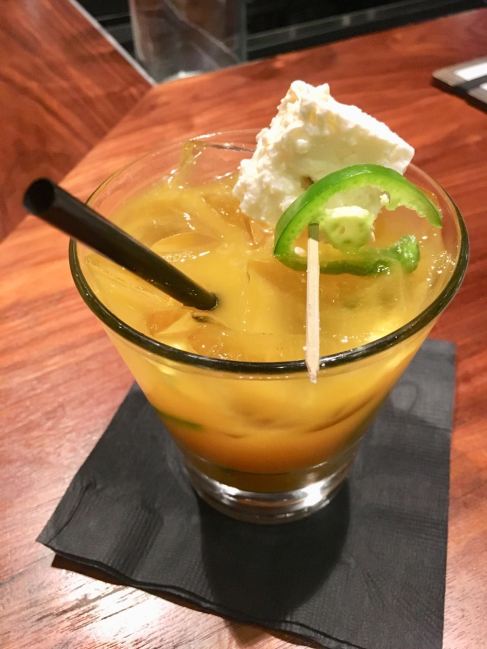 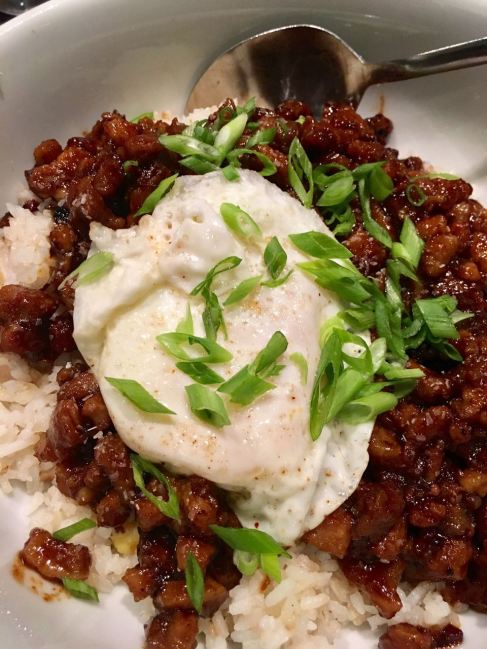 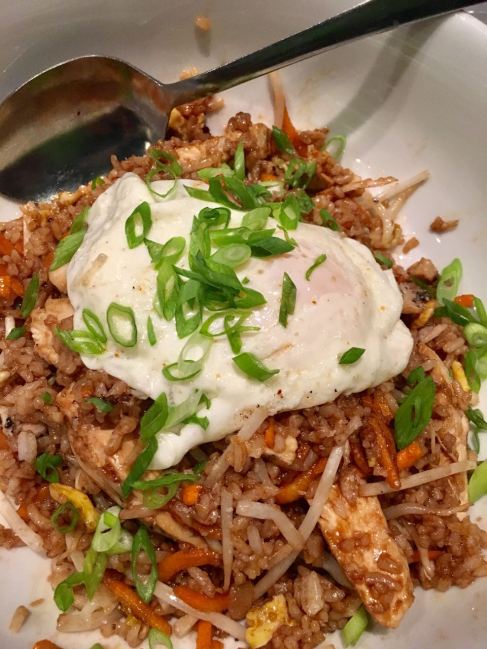 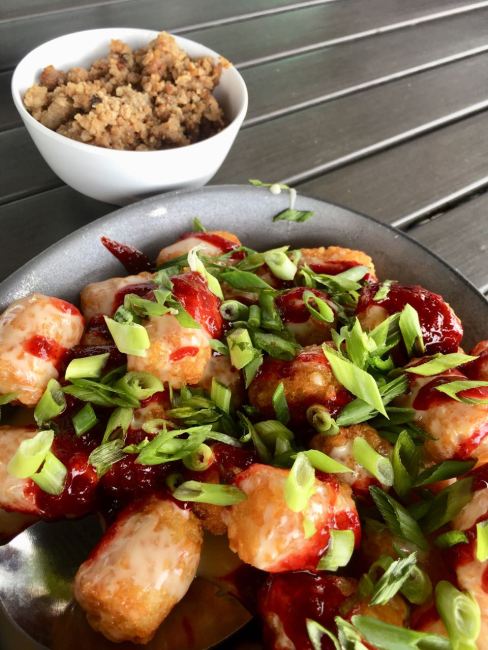 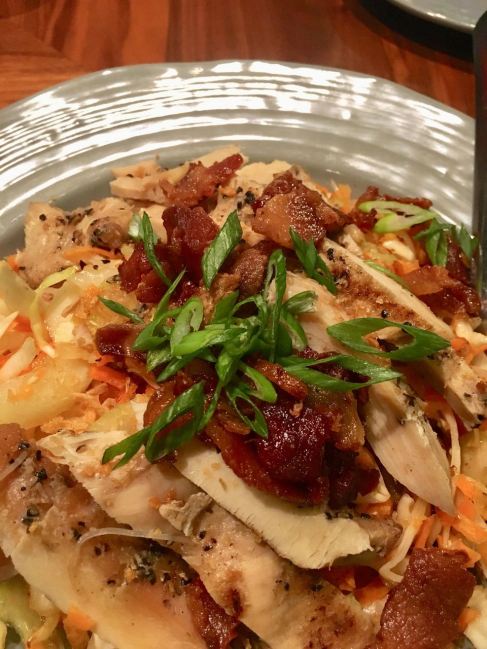 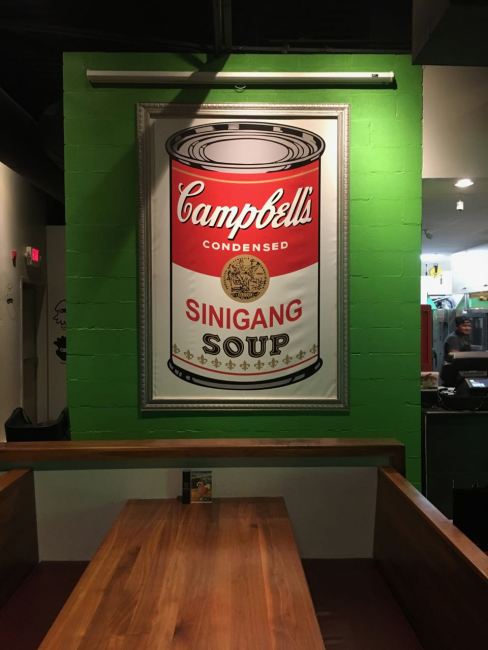 3 thoughts on “be more pacific: filipino kitchen and bar [closed]”